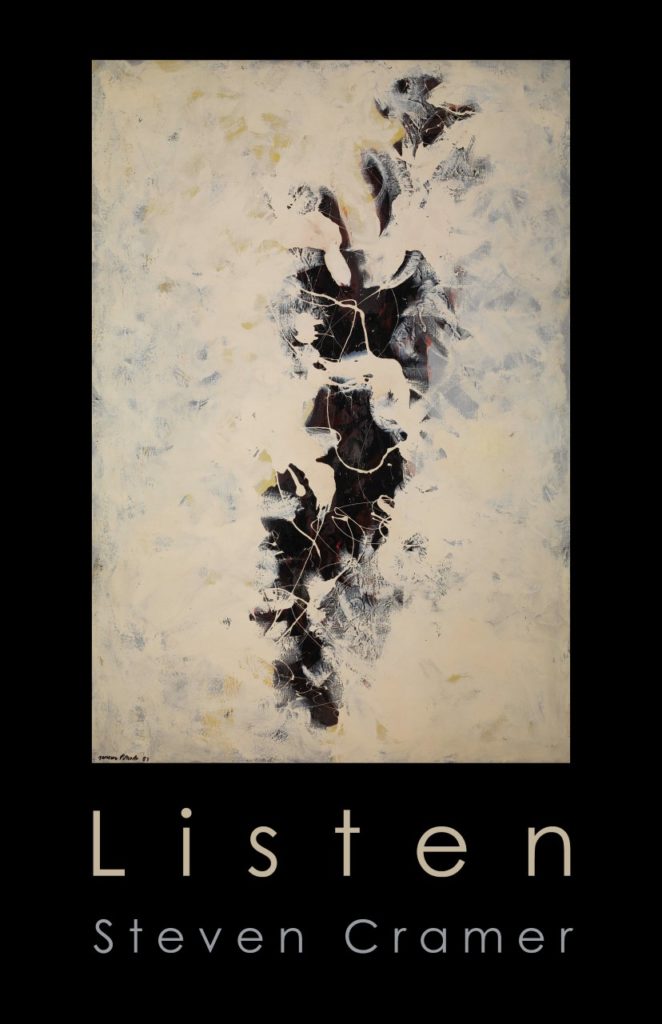 Steven Cramer’s sixth poetry collection generates scores of illuminating juxtapositions: the privacy of a son’s shower-aria and the public lies spewed by the demagogue; what Martin Luther, The Thinker, and Charmin have in common; Renaissance garb—the stomacher, pincnets—wrapped in a headline announcing the moon-landing, to name just a few.  Listen begins by facing and facing down the paradox Dickinson called “that White Sustenance/Despair,” and ends its journey nearby the “questionable sea” of emotional autonomy.  Along the way, there are poems that vivify the magical thinking which shapes, or misshapes, our deepest attachments, as well as the impingements of the so-called world on the so-called self.  Experimenting with many verse forms to give shape to the mind’s restless shifts and associations—sometimes absurdly funny, bracingly honest, and always sharp in thought and craft—the lyric testimony of Listen reaffirms the indispensable, if fragile, consolations of art.

Steven Cramer’s Clangings was a tough act to follow, but its dive into mental disturbance by way of a persona has permitted, in Listen, a movement into the darker corners of the poet’s own psyche. A very agile mind inhabits these poems, which are enhanced by exciting leaps from image to image and reference to reference, as well as by unexpected quotations, allusions, etymologies, bits of history, and asides that inform and delight. Like Cramer’s previous book, Listen will reward reading after reading. | Martha Collins

When the locals machete them, “coconuts thud like dud bombs on the lawn.”  A man in an MRI machine becomes “a loaf of dough forbidden to rise.” A yogini tells her class to “let the shenanigans of our thinking simmer down.”  Yes, these poems begin in depression, but their territories are wide, diverse, and very vivid, and Cramer’s talents as a poet and storyteller are magnificent.  Witty and erudite, Listen shines light on the sympathies and sadnesses of illness and the riches of a life deeply attuned to the fragile self and the world the self passes through.  This is a marvelous book by a poet in top form. | Kevin Prufer

In his sixth collection of poetry, Steven Cramer, founder of the Lesley University MFA program, looks at and through the fogs of memory and depression. In Listen, Cramer tries to distill a “bedlam of thought.” He is, by turns, matter of fact, nailing the sometimes-funny sometimes-sad absurdity of the world, as in “Costco”: “enough Reynolds Wrap to foil an asteroid, / Eros in particular. Who’s not aroused / by sales?” And warmly sensual: “when he comes, the game beats / in his heartbeat thumped by the wallop of her heart / beating against his; and like a spider tumor, spins / webs in his brain, in love now with how it’s played.” | Nina McLaughlin, The Boston Globe

Incisive and various in its approaches, Listen deploys blank verse, tight quatrains, prose poems, and adaptations of international poets in the service of a full heart and open mind. The speakers of these poems, while serious, often resist taking their speech too seriously: So much of our lives we live over our heads! captures the book’s irreverent affection for our so-called selves. | Ploughshares, Editors’ Shelf

Listen is available from Bookshop.org, MadHat Press, or Amazon.